Reds failed to build on two encouraging home wins at the Globe Arena as they went down 3-1 to Morecambe.

A crowd of 1098, including 33 Reds’ fans who had made the 570-mile round trip, saw Kevin Ellison pounce on a handling error by goalkeeper Daryl Flahavan to break the deadlock four minutes before the break.

Reds were the better side for 20 minutes at the start of the second half and were threatening an equaliser when Shaun Miller finished with style to double the Shrimps’ lead.

Shamir Fenelon had a shot cleared off the line before Rhys Murphy scored for the second game in a row with five minutes to go. But any hopes of an equaliser were ended in stoppage time when Paul Mullin sealed Morecambe’s win with a penalty after Mitch Hancox tripped Aaron Wildig.

Reds named an unchanged starting XI for their first visit to the Globe Arena with the same substitutes as they chased three successive wins for the first time since March.

The Shrimps had scored more goals and conceded more than any side in League Two and their attack was led by Miller, who had a loan spell with Reds at the end of 2014.

Morecambe were first to threaten on 14 minutes. Ellison’s cross from the left picked out Alex Kenyon’s late run but the midfielder’s shot was straight at Flahavan.

Reds had already pushed Roarie Deacon into a more central midfield role which gave Lewis Young room to get forward but it was from the other flank that Reds created their best moment, but Gwion Edwards’ mazy run was ended when he fell under challenge from Alan Goodall in the box. Half-hearted appeals for a penalty were ignored by referee Handley who then booked the Welshman for diving instead.

Flahavan continued to be the busier keeper and he was grateful when Miller fired a low shot straight at him on 35 minutes after good work by Tom Barkhuizen on the right.

Miller was booked for a late challenge on Josh Yerworth before the Shrimps broke the deadlock on 41 minutes. Young, trying to clear Barkhuizen’s cross under pressure from Ellison, headed the ball back towards his goal. Flahavan seemed to have it under control under the bar but dropped it onto the head of ELLISON who nodded it gratefully over the line.

Flahavan made a solid save to keep out Barkhuizen’s admittedly mis-hit volley and for all their possession in the final third Reds failed to test Barry Roche in the first half.

It was no surprise to see a response from Crawley after the break. Matt Harrold finally forced Roche into action, although his shot lacked power and Deacon worked some space but could not keep his effort on target.

Inbetween came Crawley’s best moment so far. Young was fouled on the right-hand edge of the box and Hancox’s inviting free kick found Yerworth but there was perhaps too much pace on the ball and the defender could only direct his header wide.

On the hour Roche had to spread himself to touch Jimmy Smith’s volley around the post as Reds continued to offer the greater second-half threat.

But Morecambe doubled their lead with their first attack of the half on 65 minutes. MILLER did well on the left to weave his way past two defenders into the box and made room to give Flahavan no chance from close range. It was against the run of play but nonetheless a well-worked goal.

Fenelon and Luke Rooney came on for Deacon and Harrold and with 15 minutes left Fenelon was desperately close to reducing the deficit when he got in behind Shaun Beeley and stabbed a shot past Roche which was hacked off the line by Andy Parrish.

Hancox then found Murphy with his inswinging corner but despite beating Roche to the ball he could only direct his effort wide.

But five minutes from time Reds gave themselves a lifeline. Roche failed to hold onto Hancox’s driven cross from the left and MURPHY stabbed home the loose ball to make it 2-1.

Rooney wasn’t far away with an effort from 25 yards but any hopes of a comeback were ended in the first minute of stoppage time when substitute MULLIN scored from the penalty spot after Hancox had tripped Morecambe’s other sub Wildig. 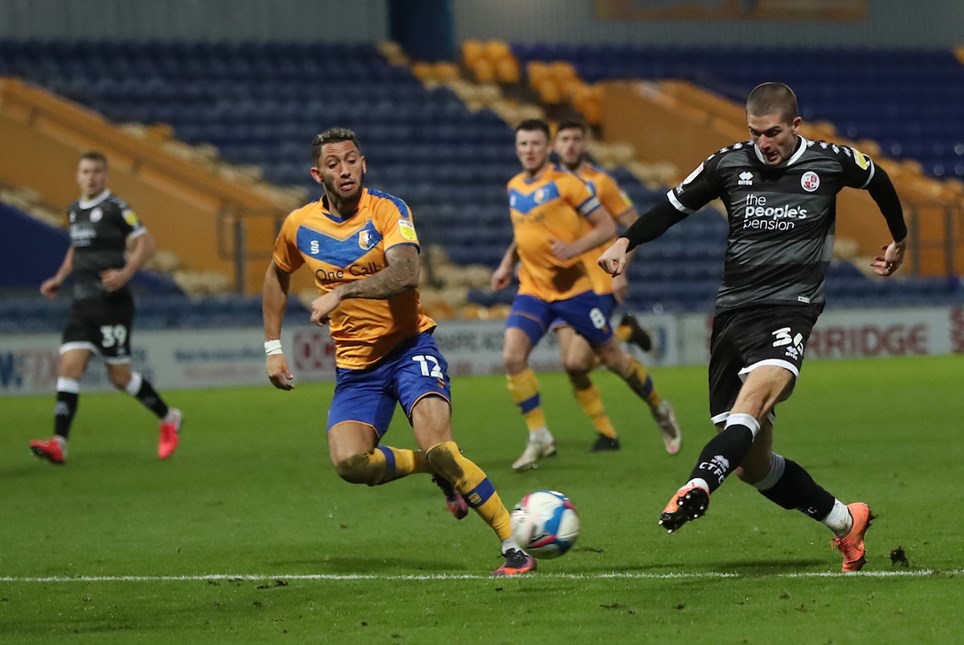 ZAID AL-HUSSAINI MOVES OUT ON LOAN