Although our histories meant we did not meet today’s opponents in a competitive match until our first season in League One in 2012-13, we have had some exciting, dramatic and goal-filled encounters in that short time.

Our first meeting came on a Tuesday night at the Ricoh Arena in November 2012, when Richie Barker’s side were in the top six after a really bright start, including a number of away wins.

However, we found ourselves 2-0 down by half-time courtesy of John Fleck and on-loan David McGoldrick and despite Billy Clarke pulling one back a wonderful curling effort from McGoldrick wrapped up the points. The return came in April, four days after we had enjoyed a memorable win at Sheffield United to potentially ignite a late play-off push and we maintained it with a 2-0 victory, goals coming from Clarke and Conor Essam. 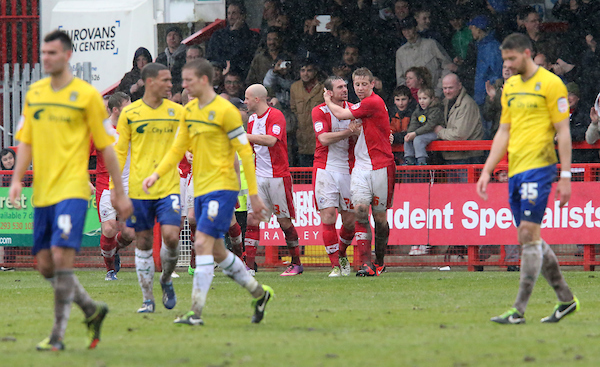 Conor Essam celebrates his goal against Coventry in April 2013

In 2013-14, we hosted first and on the opening day of the season when our visitors were going through difficult times off the field having entered administration and been forced to play their home games at Northampton Town’s Sixfields Stadium.

They were backed by a large away following but we raced into a two-goal lead through a superb individual goal from Jamie Procter and Joe Walsh’s first strike of what would be a prolific opening few months for the defender. The second half was different though with Callum Wilson and Franck Moussa levelling things up before Mike Jones (main picture) beat the offside trap to net an 84th minute winner.

The rematch at a sparsely populated Sixfields in January saw a role reversal as the Sky Blues established a two-goal lead thanks to a Mat Sadler own goal and Moussa. They held it until seven minutes from the end when Procter halved the arrears, then Andy Drury rescued a point for what was by now John Gregory’s team.

In keeping with the pattern of the four previous matches the home side, by now back at the Ricoh, took an early 2-0 lead in October 2014, with Josh McQuoid and Simeon Jackson on target. Once again, though, we staged a comeback to be level by half-time, thanks to one of Gwion Edwards’ specials and Izale McLeod who capitalised on a defensive mix-up to poke home. The second period was pretty uneventful so the spoils were shared.

The reverse meeting was on the final day of the season. Victory would take us above our visitors and therefore guarantee our safety, but not necessarily at their expense as there were so many possible permutations. A goalless first-half ended with drama as our ‘keeper Brian Jensen saved a penalty from Nick Proschwitz.

That seemed to give the home fans a lift and momentum to take into the second half and so it proved when Mathias Pogba headed home a priceless goal. Results elsewhere meant that Coventry were also safe, but they weren’t to know this so continued to push for an equaliser, one they duly got through Marcus Tudgay’s header. With other scores not favouring us, we had to go for a winner but a mistake allowed James Maddison to slot home in added time and condemn us to a return to League Two after three years at that level. 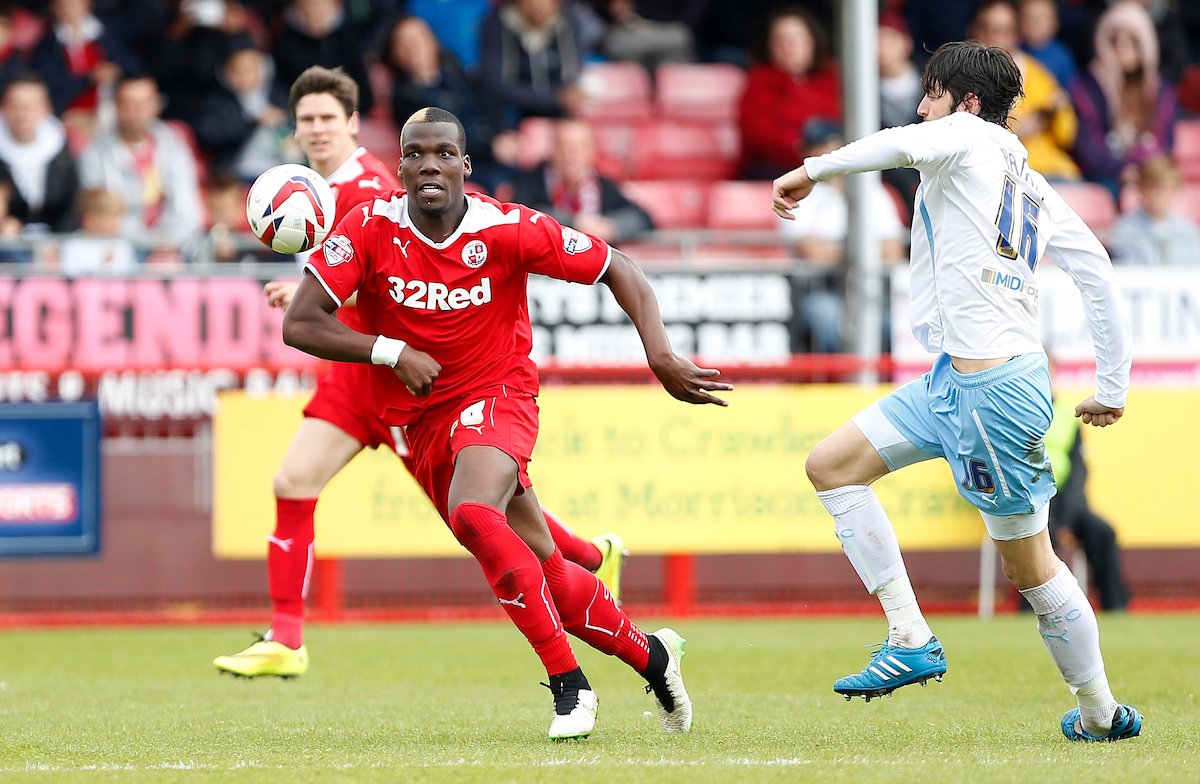 Our relegation meant that we did not meet in the league again until November this season, when Jordan Roberts gave us a first-half lead, with Marc McNulty replying 16 minutes from time to deny us all three points.

In between times, the Checkatrade Trophy paired the sides together in December 2016 when single goal from Marvin Sordell was enough to win it for the Sky Blue who went on to lift the trophy at Wembley.

One of the earliest games here at the Broadfield Stadium saw these clubs meet in August 1997 with Coventry then in the Premier League. Gordon Strachan brought down a strong team and they triumphed 4-1, but Broadfield lad Clinton Moore had the honour of netting against a top-flight side, coolly lobbing over Steve Ogrizovic. One interested spectator was an 18-year-old Rio Ferdinand, who was not there to see our illustrious opponents but Reds trialist Gavin Rose, now the manager at Dulwich Hamlet.