The club was saddened to hear that our former Vice President Fred Pitts passed away last week at the age of 90, after a short illness.

Fred first got involved in the club during the 1970s and was Crawley Town’s Commercial Manager right up until the move to the Broadfield Stadium in 1997.

He remained a passionate supporter of the club and was a Vice President for many years.

Our thoughts go out to Fred’s family.

Mick Fox, who worked with Fred when he was a director of the club, paid this tribute:

It was with great sadness that I learned this week of the death of Fred Pitts, another of the “old guard” from our Town Meadow days, and a great friend of the club.

My main memories of Fred date from the 1980s, and then when I joined the board in the early 1990s he was one of the friendly faces. In his role as Commercial Manager, Fred was always looking for ways to boost ticket sales in one of the club’s fund-raising schemes, or fighting for our right to run car boot sales in the club car park.

Another thing I remember of Fred is that he was nearly always immaculately turned out, particularly on matchdays in his club uniform of blazer and tie. I say “nearly always” because another of Fred’s great attributes was his willingness to muck in on any task around the ground that needed doing, including some building work in the early 1990s!

I would often drop in to Town Meadow and find Fred and Stan Markham up to their eyes in mud and tools. As the photo below shows, Fred could turn his hand to many practical tasks, which, allied to his fund-raising skills and his ability to get on with all of our supporters, made him an invaluable part of the “team” for many years, as well as a great character.

Fred remained a friend and supporter of the club in the Broadfield days and for a time was one of our vice presidents. He will be sadly missed by many. RIP Fred and sympathies to your family.

Our team photo above from the 1983-84 season shows Fred, standing, on the far right of the back row. 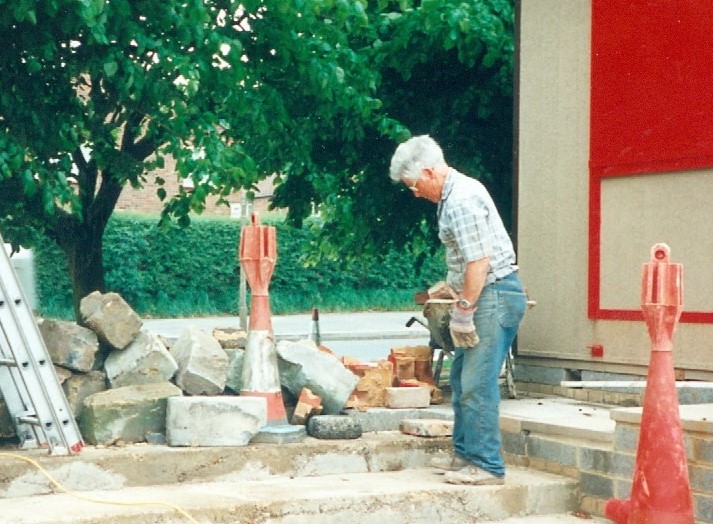