It was no more than Crawley deserved after outplaying their visitors for most of the game. They hit the woodwork twice and Salford keeper Chris Neal made several good saves. The visitors had a decent spell in the second half but the home side were worthy winners in front of a crowd of 2,400 and could easily have scored four or five goals.

The statistics made telling reading: 30 shots, 9 on target and ten corners for Crawley, the most created by any EFL side this weekend.

Reds made three changes to the side beaten on the opening day by Carlisle. The suspended Lewis Young was replaced by Josh Doherty while Reece Grego-Cox came in for Filipe Morais. Up front Mason Bloomfield came in for Ollie Palmer while new signing Josh Dacres-Cogley was among the subs.

The hosts were on the front foot early on. Tom Dallison crashed a header against the underside of the bar when Ferguson’s free kick picked him out at the far post, although the offside flag was quickly raised.

Reds wasted another great chance on 13 minutes. Grego Cox’s pass picked out Lubala eight yards out but he hit the side netting when the home fans in the South Stand goal were expecting the net to bulge.

Ferguson dispossessed Mark Shelton but volleyed over then Salford keeper Chris Neal had to push away Grego-Cox’s shot from an angle before Salford another big let-off in the 31st minute when Tom Dallison’s spectacular overhead kick hit the underside of the bar moments after Neal pushed aside a curling left-foot effort by Lubala.

But Reds weren’t to be denied and broke the deadlock in the 34th minute when referee Salisbury spotted Nathan Pond’s clumsy challenge on Jordan Tunnicliffe and awarded a penalty which Lubala stroked past Neal as the keeper dived to his left. 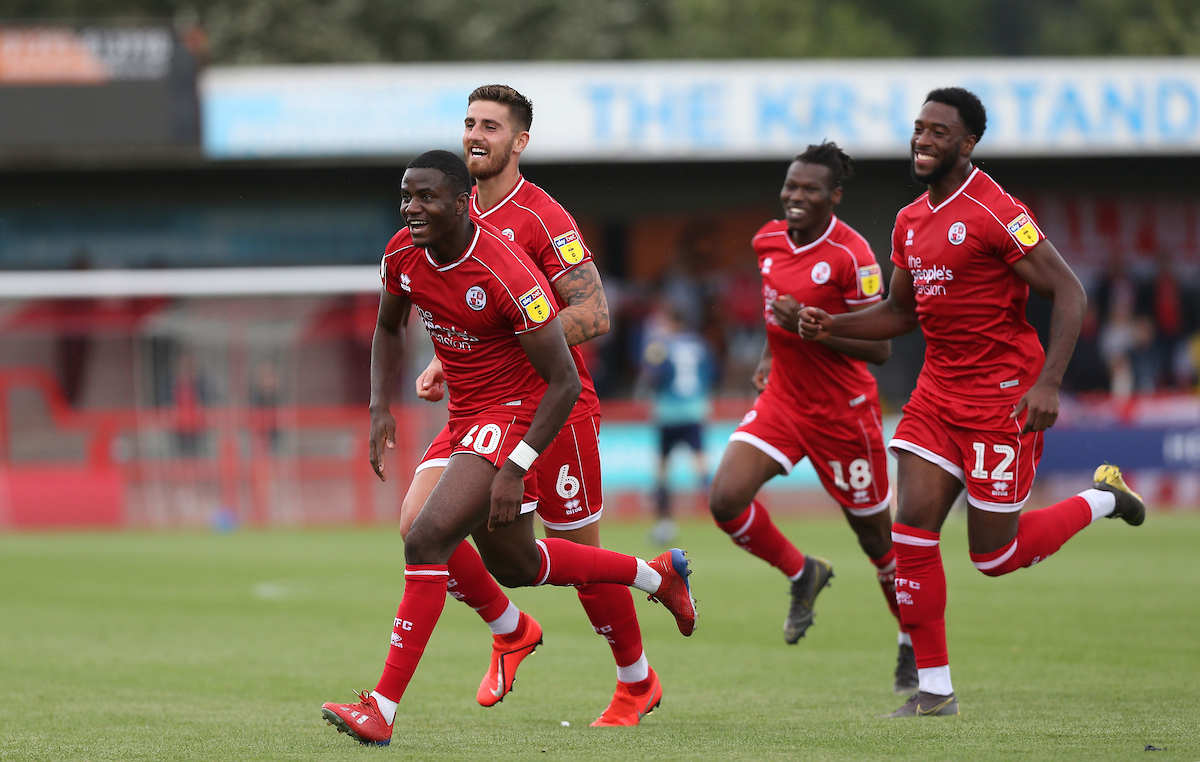 Bez Lubala celebrates his second goal of the season

Mason Bloomfield had picked up an ankle knock early on and he was replaced by Ollie Palmer at the break and Reds were soon on the offensive again. Lubala and Palmer combined to set up Grego-Cox in the 50th minute but Neal got down to keep out his shot.

Palmer had a shot blocked then Neal denied Lubala at his near post but Reds got a deserved second on 54 minutes when Salford gave the ball away 20 yards out and Ferguson hit a right-foot shot which had too much power as it flew past Neal.

There was a reminder that Reds still had work to do when Glenn Morris grabbed Louis Maynard’s long-range header but the home side continued to dominate with Grego-Cox next to threaten when his volley was turned wide for another corner. It was his last involvement as Filipe Morais replaced the wide man on 68 minutes.

Salford squandered a great chance to score seconds later. David Sesay was dispossessed by Richie Towell who ran unchallenged towards goal but dragged his right-foot shot wide with only Morris to beat. The visitors threatened again in the 74th minute when Piergianni’s header hit the outside of the post as they enjoyed their best spell of the game.

But Reds nearly put the icing on the cake in the final minute when a brilliant move ended with Panutche Camara finishing tamely after four players were involved in a great build-up.