Port Vale are familiar opponent to the Reds, having been our first ever opposition in the Football League back in 2011.

That game ended 2-2 at Vale Park, with Tyrone Barnett scoring our first goal in the league after 39 minutes. Marc Richards leveled the scores before the break, but Kyle McFadzean put us back ahead shortly after the restart.

It looked like the 500 strong travelling support were going to go home happy, but our introduction to league life was a harsh one as Louis Dodds scored an equaliser right at the death to deny us opening day victory, not long after John Dempster had been sent off for a second yellow card. 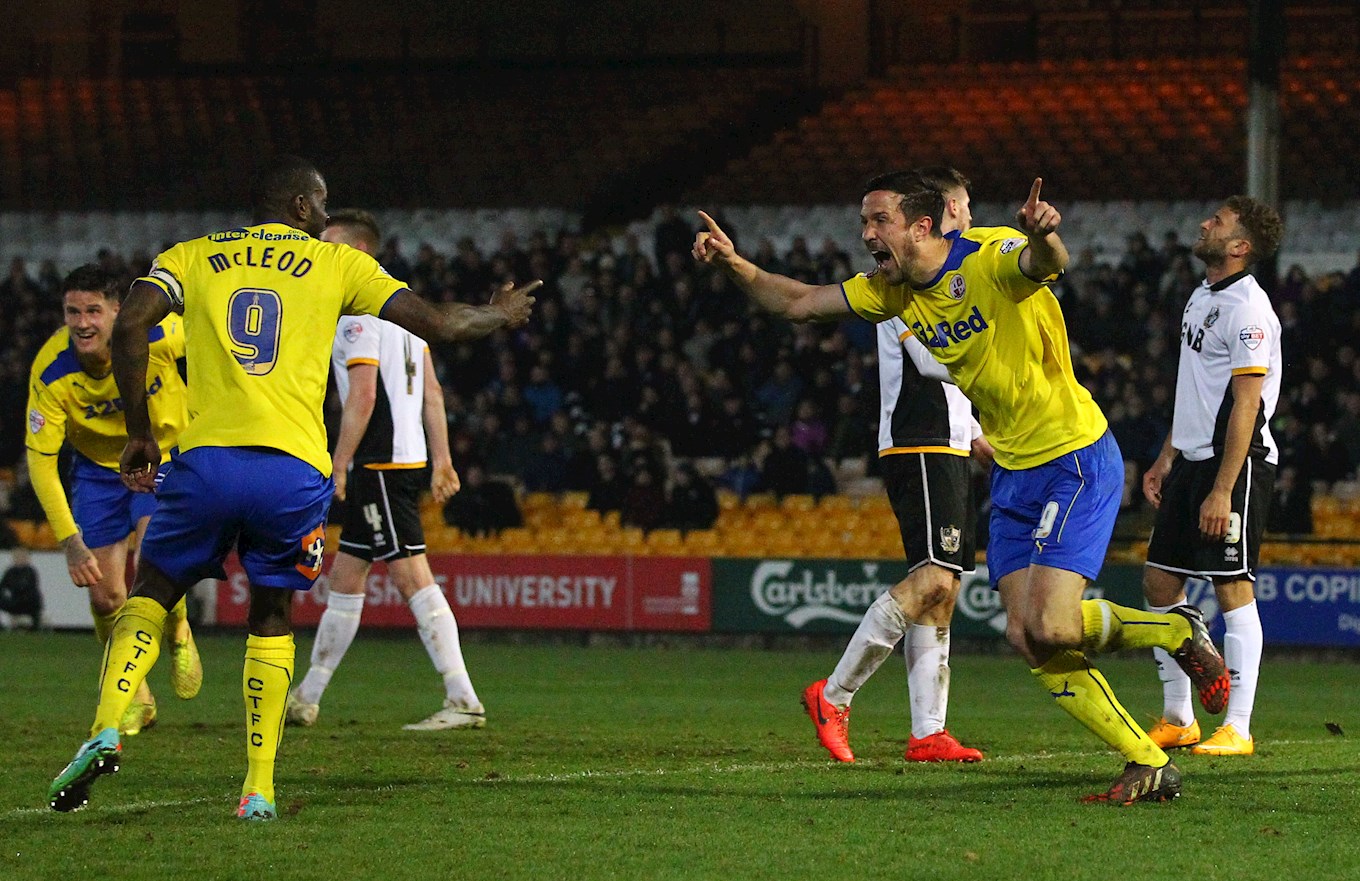 Away day delight: On-loan Richard Wood celebrates after scoring our third goal at Vale Park in 2015

That is the only draw between the sides. Since then, there have been five wins for Port Vale and three for Crawley.

In the return fixture, there was another thrilling encounter as the Reds came from 2-1 behind to win 3-2 thanks to Gary Alexander’s brace in the final 20 minutes.

The Valiants won the next three fixtures in a row between October 2013 and December 2014. First, the Reds were beaten 3-0 at home in our first season in League One as Doug Loft, Louis Dodds and Ben Williamson all scored. In the return fixture, Chris Robertson and Dannie Bulman both saw red in an a high-intensity encounter in Staffordshire. Billy Clarke had given us the lead from the penalty spot in the first half, but Vale came from behind in the second half to win the game 2-1 through goals from Billy Knott and Doug Loft.

Dodds was on target for the fourth match in five against the Reds when Vale came to Crawley the following December. His goal alongside Michael Brown’s finish saw the match finish 2-1 yet again, with Conor Henderson striking late on (main picture).

Our first win at Vale Park came in March 2015, just three days after our epic 3-2 win at Colchester in a relegation six pointer. It was to be an exciting yet nerve-wracking few days for the Reds fans, as Dean Saunders’ men won by the same score-line on a chilly Tuesday night in Stoke.

That man Dodds was on target again after just four minutes to give the home side the lead. Anthony Wordsworth equalised, but before the break Dodds had his and Vale’s second. Crawley pulled out all the stops in the second half and found themselves level through Izale McLeod just after the restart. Richard Wood’s header 20 minutes from the end sealed a dramatic and hugely important win for the Reds.

Vale’s last visit to Sussex was on the opening day of last season in what was Harry Kewell’s first competitive match in charge of the Reds. Vale were 2-0 up at half time thanks to goals from Michael Tonge and Anthony Kay, but Enzio Boldewijn grabbed a goal for the Reds just after the half time break to give the hosts hope. But all hopes of a comeback were killed off when Dan Turner made it 3-1 with ten minutes to go, and that’s how it stayed.

Last April the Reds travelled to Vale Park and picked up a 2-1 win. Tom Pope scored the opening goal of the match, but the Reds were level within ten minutes thanks to Josh Payne’s penalty. Nathan Smith’s own goal sealed victory for the Reds in the second half.

Earlier this season, Luke Hannant scored the only goal in a 1-0 win for the home side.