By Mick Fox
The club were very sorry to learn of the death last Friday (May 31) of George Parker, one of Crawley Town's remaining players from the 1940s and 50s, who would have been 96 on June 6.
Appropriately this is the anniversary of D-Day, for George served in the Royal Navy throughout World War Two and saw action around the world including time on the Arctic convoys.
From speaking to George's son, John, I was told that George received a medal for this action in a ceremony at the Soviet Union Embassy in London.
George, who was born in Kensington, West London, was a keen sportsman and spent several years following the end of the war playing as an uncompromising defender/ half back for Crawley Town. 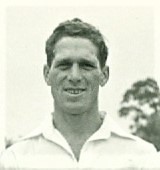 The photo is from his early days with us in 1947 and he is pictured fifth from the left in the back row behind the goalkeeper.
George played for us through until 1953 before moving on to play successfully for the Crawley Ramblers club, both at football and cricket. He lived in West Green throughout this time and was a well known character in the area.
Our condolences to John and the rest of George's family.
John Parker would like to invite all who knew George to attend his funeral on Friday 14th June at 10.30am at Crematorium and then afterwards for food, drinks and lots of memories at the Redz bar at The People's Pension Stadium.