A look-ahead to Saturday's trip to Stadium MK

Crawley head to Milton Keynes looking for only their second win since January 5, although they are unbeaten in three and haven't lost away from home since January 15.

MK Dons are in good form, having won their last three games with home and away victories over Newport County either side of a 3-2 away victory at Carlisle. Currently fourth in the table, two points outside the play-offs, they have lost three of their last six in front of their own supporters to Crewe, Colchester and most recently Swindon Town.

Our record against MK Dons currently stands at two wins, two draws, and three defeats over seven matches, all played in League One.

The first meeting between the two sides took place in October 2012. Billy Clarke scored a brace as the Reds overcame their opponents 2-0 at the Broadfield Stadium on a chilly Tuesday evening. The return fixture at stadium:mk the following April lacked excitement and was one of Town’s least entertaining matches of the season. It ended 0-0.

Crawley got revenge for that defeat with an impressive 2-0 victory at stadium:mk in April 2014.

Andy Drury struck early for the Reds with an impressive goal and Mike Jones doubled the lead for Town on the stroke of half-time. MK battled in the second half and dominated possession, but Reds held on for a fantastic away win.

For the third consecutive time the next match ended 2-0 as the Dons recorded a home victory in August 2014. Future England star Dele Alli scored early on for the hosts. Former Red Kyle McFadzean was sent off for MK for a challenge in the area, but ex-Dons striker Izale McLeod missed from the spot and Town were made to pay for that mistake. Benik Afobe doubled the home side's lead in second-half stoppage time.

The next meeting in January 2015 was probably one of the most memorable matches seen at the Broadfield in recent years.

There was no sign of what was to come when McLeod’s penalty put the Reds ahead in the opening quarter of an hour. But midway through the first half goalkeeper Brian Jensen picked up a hand injury that was to force him off. With no replacement on the bench, striker Matt Harrold was thrown in goal just before half-time and Jensen stood behind the goal at the South End to give him advice. 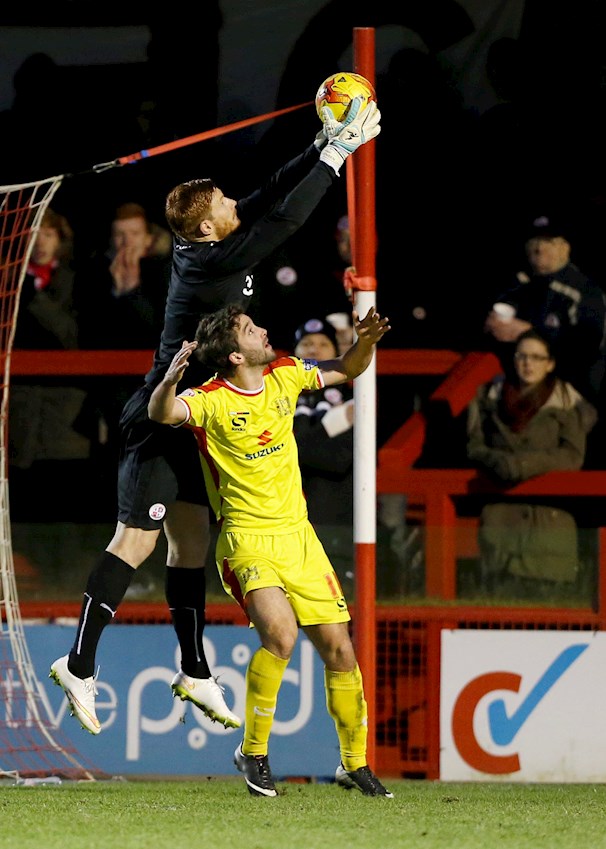 ‘The Ginger Neuer’ as he subsequently became known, pulled off some wonderful saves before McLeod gave the Reds a 2-0 lead. Will Grigg managed to finally put one past Harrold with 15 minutes to go but Reds  looked to have secured a memorable victory. That was until the sixth minute of stoppage time when they failed to clear a goalmouth scramble and Dele Alli smashed home a late, late equaliser to make it 2-2.

MK Dons boss Paul Tisdale is warning against complacency despite a run of three successive wins. He said: "We're in fourth position, but Crawley have gone to the three teams above us and come close to getting a result against two and beaten Lincoln. They've done well against those teams. That should be a warning to the players."

Jimmy Smith is still a long term absentee for the Reds and it remains uncertain when he will return to action. Luke Gambin (hip) and Ibrahim Meite (calf) are both back in training and in contention for a place in the squad.

MK Dons defenders George Williams and Jordan Moore-Taylor have been sidelined for a while but Baily Cargill, Russell Martin and Mathieu Baudry were added to the injured list last week, and that could mean a defensive reshuffle by the hosts. Baudry is almost certainly out.

Thomas Bramall is in charge on Saturday and he has officiated two Crawley games before, both this season, and they have both been away from home. He was in charge for our 1-0 win over Cheltenham on the opening day of the season, and again at the turn of the year when we lost 2-1 at Stevenage.

He has given out 78 yellow cards and 3 red cards in his 35 games so far in this campaign.

He will be assisted by Leigh Crowhurst and Robert Atkin. The fourth official is Marc Wilson.

Reds are priced at 9/2 to claim their third away League win of the season with League sponsors Sky Bet. Paul Tisdale's men are 7/4 on with the draw available at 3/1.

The game will be available for UK subscribers of iFollow from 2.55pm with live commentary from BBC Sussex & Surrey Sport's Gary Smith and summariser Ken Blackmore.

You must be a subscriber to listen (UK) to this service. You can subscribe here. Overseas users can of course watch the action live.