We will renew rivalry with Bradford City next season following their relegation from League One.

There is a nice symmetry to the six games we have played against the Bantams. We won the first three and Bradford have won the last three.

The second of those wins came in one of the most famous matches in our eight-year Football League history. We’re talking, of course, about the infamous ‘Battle of Bradford.’

Steve Evans took Reds to Valley Parade in March 2012 looking for three points in the promotion race and we took the lead in the 54th minute through Gary Alexander. It had been fairly uneventful until then with only one player – Hope Akpan – shown a yellow card by referee Iain Williamson.

But between Alexander’s goal and Chris Dagnall’s leveller in the 72nd minute four Reds were booked including Michel Kuipers for time-wasting. Four minutes after the equaliser on-loan Leon Clarke put Reds back in front with a header (pictured) and we held on for a vital 2-1 win.

Then, in the immortal words of Reds Player commentator John Barnett, “it all got really nasty out there.” A post-match brawl involving both goalkeepers and several players ended with five players including Reds’ Pablo Mills (who had been booked) and Kyle McFadzean sent off. JB’s commentary even featured on the BBC Lunchtime News the following day, by which time Pablo had been stripped of the captaincy by Evans.

Anyway, victory completed the double over Bradford whom we had beaten 3-1 in September 2011 thanks to two goals from Tyrone Barnett and one by Andy Drury, after Kyle Reid put Bradford in front.

We met again in October 2013 in League One when a goal from Emile Sinclair – one of only four he scored for the club – sealed a 1-0 win. John Gregory was in charge by the time we headed to Bradford for the return when Jamie Proctor made it 1-1 in the second half only for Garry Thompson to score an 85th-minute winner for the Bantams.

The following season – which ended in relegation for Reds – we lost 3-1 at home in an early-season encounter. Joe Walsh made it 1-1 in the 54th minute but Bradford then struck twice to seal three points. The return game at Valley Parade (pictured below) was played on a gluepot of a pitch was settled by an early goal from Francois Zoko for the hosts and despite a good performance Dean Saunders’ side went home pointless. 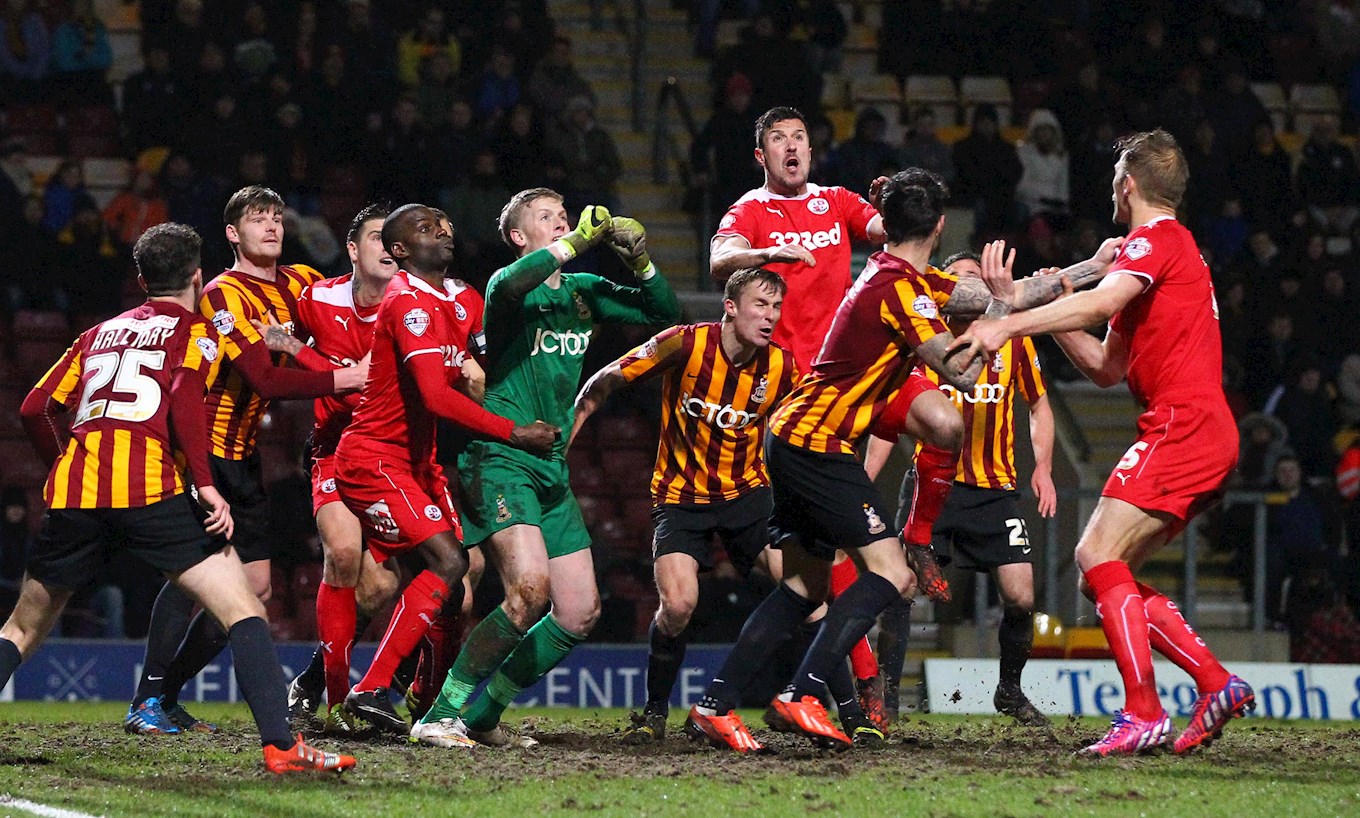