Reds produced a resilient performance to pick up a very good point at third-placed Newport County in Tuesday’s League 2 action at Rodney Parade.

Ashley Nathaniel-George put Crawley ahead with a first-half penalty and Reds stood firm until midway through the second period when Jordan Tunnicliffe was penalised for a foul and Tristan Abrahams levelled from the spot.

Glenn Morris earned his corn with some good saves and Abrahams thought he’d won it when his stoppage-time effort struck the post but that would have been harsh on Crawley, who showed some real gumption in south Wales.

There were two changes to the team beaten 2-1 at Bradford on Saturday. David Sesay replaced Lewis Young and Nathaniel-George came in for Panutche Camara. Ashley Nadesan made a welcome return to the bench. The striker’s last League 2 involvement was the 1-0 win over Cheltenham on August 31 and he came on for the closing stages.

Morris was the first keeper to be called into action when he got down to his right in the ninth minute to push away Josh Sheehan’s low shot.

Newport had a good spell midway through the half but Reds worked hard all over the pitch to close down space and look to counter-attack.

Bez Lubala had two decent strikes at goal, one from 25 yards which fizzed over the bar and the second from 20 yards which was on target until a deflection took it wide.

Morris made another decent stop after Labade’s free kick had been flicked on by Jamille Matt at the near post, but as the first half progressed Reds looked fairly comfortable without threatening too much.

But they maintained their record – along with Liverpool – of scoring in every league game this season when they took a 35th minute lead from the penalty spot. Lubala did really well to get to the line and his low cross was handled by Danny McNamara. Referee Drysdale awarded a penalty which Nathaniel-George swept past Tom King for his fourth goal of the season.

Newport frustrations – particularly in the stands – grew as the half came to an end with Mr Drysdale the subject of nearly all their complaints.

There was a worrying moment early in the second half when David Sesay was accidentally hit on the head as he challenged Mark O’Brien but was able to continue after lengthy treatment.

Newport began to up the tempo and Padraig Amond squandered a great chance when he fired wide after Morris pushed Scott Bennett’s swerving drive into his path. As the home fans found their voice again Reds had to dig deep but coped pretty well and had second penalty appeals, after Lubala appeared to have been fouled by Bennett, turned down.

Instead there was a second spot kick at the other end on 70 minutes when Tunnicliffe’s rash challenge on Robbie Willmott was spotted by the referee. Abrahams immediately came off the bench and with his first touch made it 1-1 as he smashed the penalty down the middle.

Morris made another decent save three minutes later when Bennett stabbed the ball goalwards after George Nurse’s shot fell into his path but as Newport pushed for a winner gaps opened up for Reds to exploit and Reece Grego-Cox was inches away with a right-foot shot after Panutche Camara, who had just replaced Nathaniel-George, had seen an effort blocked.

But in stoppage time the visitors’ goal led a charmed life. Newport won three successive corners and the third of them led to the mother of all scrambles in the six-yard box. Abrahams hit the post then Morris produced a miraculous save to claw away Ryan Inniss’s shot as the home fans stood to acclaim a winner.

Instead 83 Reds fans stood at the end to applaud a gutsy performance by their side and a well-earned point.

Main image: Ashley Nathaniel-George scores from the spot and, below, celebrates the goal. 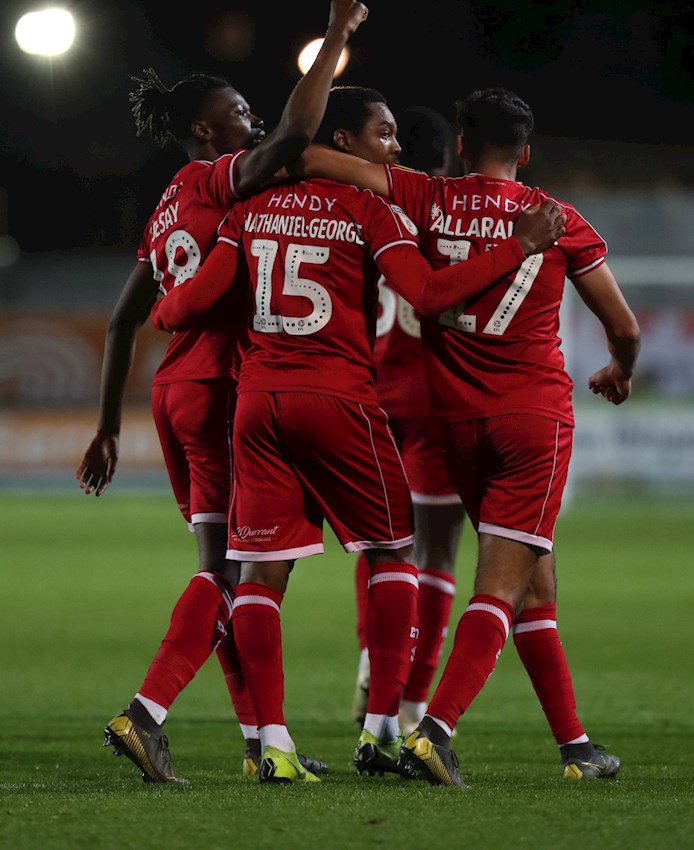