Bez Lubala scored his sixth goal of the season as Reds came from behind on their travels again to pick up a deserved Sky Bet League 2 point at Moss Rose.

Macclesfield, who began the day in seventh place, went ahead midway through the first half through Theo Vassell and despite plenty of possession Crawley struggled to create clear-cut chances against a well-drilled home side until Lubala proved deadly when he struck a 25-yard free kick (pictured above) into the top corner in the 71st minute.

On the balance of play it was no more than Crawley deserved after a much-improved second half ahead of back-to-back home games against Mansfield and Plymouth,

On his 44th birthday and a year since he took charge, Gabriele Cioffi made one change to the side which beat Cheltenham in our last league outing with fit-again Panutche Camara replacing Filipe Morais. With Ashley Nadesan injured, Tarryn Allarakhia was among the subs.

Conditions at Moss Rose were in marked contrast to the Storm of Biblical Proportions which had ruined the December 2018 meeting, with bright sunshine at kick off. But the pitch was dry and bobbly and Reds had an early warning when Theo Archibald cut inside after two minutes and his left-foot strike clipped the top of the bar.

Reds actually started quite well and won a couple of early corners. Lubala had their first chance in the 11th minute when Bez Lubala’s right-footer forced Owen Evans into a save. But for much of the first half Crawley struggled to make much headway in the final third. Macclesfield got players behind the ball when danger threatened and as frustration began to creep into their play, Josh Doherty and David Sesay were booked for fouls.

Macclesfield didn’t threaten much either, but they broke the deadlock from a set-piece on 21 minutes. A short corner was played back to Emmanuel Osadebe who clipped the ball into the six-yard box. The ball ricocheted off Nathan Ferguson into the path of Theo Vassell who bundled it over the line from a couple of yards out.

The home side now had something to hang onto and it wasn’t until the 41st minute before Crawley threatened when Lubala found space in the box but his shot took a deflection off Vassell and Evans was able to save. Two minutes later the visitors produced their best move of the half. Doherty played Nathan Ferguson in space on the left-hand side of goal but his side-foot effort failed to trouble Evans. It summed up a disappointing first half and the Head Coach spent several minutes after the half-time whistle speaking to his assistant Edu Rubio on the pitch before heading back to the changing rooms.

Cioffi reacted by bringing on Mason Bloomfield for Ferguson at the break and Reds began the second half with a lot more purpose, although Morris had to be alert to turn another Archibald curler over the bar.

But despite dominating possession the visitors were still struggling to create anything clear-cut against a well organised home side content to soak up pressure and counter. On the hour Morris was forced into a save when he got down to push Stephens’ low drive round the post. Archibald then found himself in space on the right but Morris made a comfortable save this time.

It was hard to see where a Crawley goal was coming from but while there’s Lubala there’s hope and on 72 minutes he made it 1-1. Kelleher handled 25 yards out in a central position and Lubala’s free kick flashed over the wall, past Evans and into the top right-hand corner. Another one for Bez’s showreel.

Six minutes later Reds were nearly in front. Evans could only push Lubala’s shot out as far as Palmer who stumbled as he made contact and the ball rolled wide of the post with the keeper beaten.

Both sides went for a winner in the closing stages but Reds stood firm to extend their unbeaten League run to three games.

Pictured below: Lubala celebrates in front of the Reds' bench after scoring his second-half equaliser. 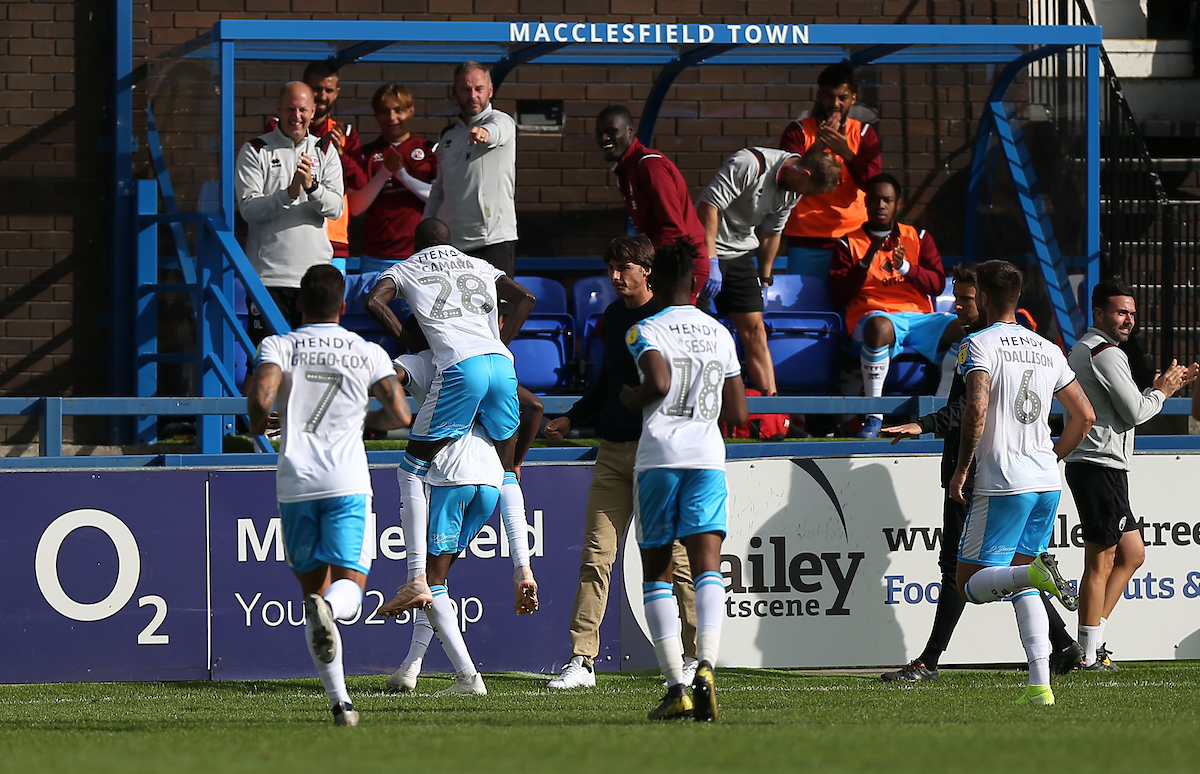