Strikers Ollie Palmer and Ashley Nadesan led the way as Reds came from behind to beat Grimsby in a five-goal thriller at The People’s Pension Stadium.

Palmer scored twice to take his tally for the season to ten but it was his strike partner Nadesan who got the man of the match award after setting up Palmer’s second before scoring a superb winner with 13 minutes to go, having been set up by Palmer.

It extended Reds’ unbeaten run under John Yems at home to five games and lifted his side up to 14th in the League Two table.

George Francomb made a return to the starting line-up for the Reds while Reece Grego-Cox was named on the bench but injury ruled out Lewis Young, Nathan Ferguson, Ashley Nathaniel-George, Mason Bloomfield and Jack Powell, while Tom McGill, the goalkeeper signed on loan from Brighton on Friday, was on the bench.

After an even opening period it was Reds who took the lead. Dannie Bulman, who celebrated his 41st birthday earlier in the week, did well to take the ball into the box before shifting it across to Palmer, who found the net with a cool, low finish under James McKeown.

Grimsby responded well.  Charles Vernam saw his shot parried by Glenn Morris, before his follow up was bundled in by Elliott Whitehouse at point-blank range to pull his side level on 21 minutes.

Grimsby turned the game on its head in the 31st minute when Whitehouse’s deep cross was met with a powerful header by James Hanson, who was superbly denied well by Morris but able to slam the rebound into the net from close range. 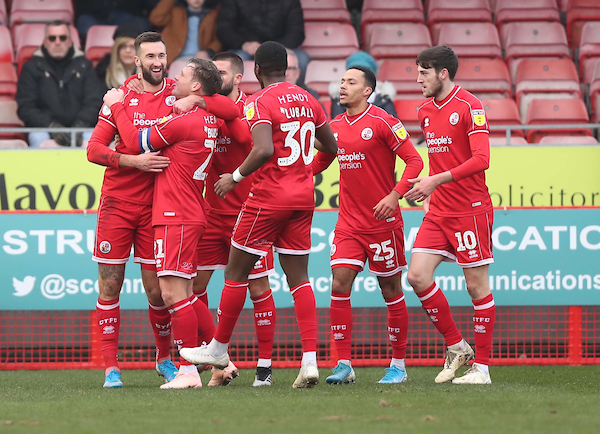 Morris produced a brilliant save to deny the energetic Vernam, tipping his shot over from a tight angle just before the break.

The Mariners went close to a third early in the second half when Hanson found the ball in the box, before sending a low shot just wide.

But the tide then began to turn Crawley’s way. They pressed further up the pitch with Grego-Cox, a half-time substitute for Panutche Camara, offering a threat down the right.

Crawley eventually got a deserved equaliser in the 70th minute when Francomb fed Nadesan on the counter, who out-sprinted Matty Pollock, before darting into the penalty area and sliding the ball across to Palmer who rolled into an open net to make it 2-2.

The Reds were on top, and completed the turnaround when Palmer was fed the ball in the box, before setting up Nadesan who powered a first-time strike with his right foot beyond McKeown in the 77th minute, sparking ecstatic celebrations behind the goal in the Bruce Winfield Stand.

Grimsby pushed forward in search of a late equaliser and Morris made a superb reaction save to deny Hanson while Hessenthaler’s effort was bravely blocked by Tom Dallison.

But Reds dug deep to run out deserved winners and they now prepare for the long trip to Plymouth on Tuesday with plenty of confidence.

Main picture: Ashley Nadesan wheels away in triumph after scoring the winning goal