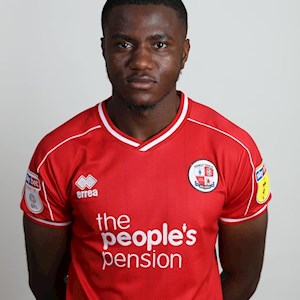 Attacking midfielder Bez Lubala joined Reds on a two-year contract, with a year’s option, from Birmingham City in June 2019.

Born in the Democratic Republic of Congo, Bez grew up in Leicester before joining Birmingham’s youth set-up in 2014 and from 2016 was a regular in their under-23s. He was given his professional debut as a substitute against Bristol City in 2018 and  made four further first-team appearances including a full debut in a Carabao Cup tie against Reading.

He made his Crawley debut in August 2019 and scored in the 2-1 defeat to Carlisle United.