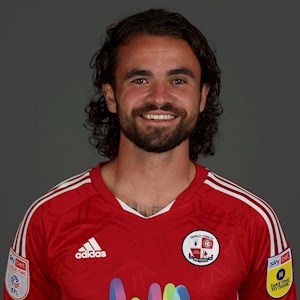 In June 2022, Crawley signed striker Dom Telford on a three-year deal after his contract expiration at Newport County.

Telford finished the 2021/22 season as the top goalscorer in League Two and was included in the PFA and Sky Bet League Two Team of the Year. Dom finished the season with 26 goals in all competitions, having made 40 appearances.

Dom began his career in Blackpool, where he progressed through the youth system at Bloomfield Road. The striker went on to make 15 appearances for the Seasiders before making the move to Stoke City in 2015.

Telford joined Bristol Rovers on loan for the 2017-18 season, where he linked up with both Tom Nichols and Tony Craig. Dom scored six goals for the Pirates before making a permanent move to Bury for the 2018/29 season.

Telford was enjoying a strong run of games with Bury before the club suffered an unfortunate collapse and were forced to liquidate at the end of the season. The 25-year-old then made a move to Devon to link up with Plymouth Argyle, where he made just shy of 50 appearances, scoring five goals.

Dom then made the switch to Newport County, where he embarked on an incredible season finishing as the league's top goalscorer. Telford’s prolific goalscoring form saw him win multiple Player of the Month Awards and earn a place in the Sky Bet and PFA League Two Team of the Year.